Our lovely Travel Consultant Pippa has recently experienced a delightful tour of Japan hosted by Wendy Wu, read on to find out about what she loved, recommends and top tips for touring Japan. 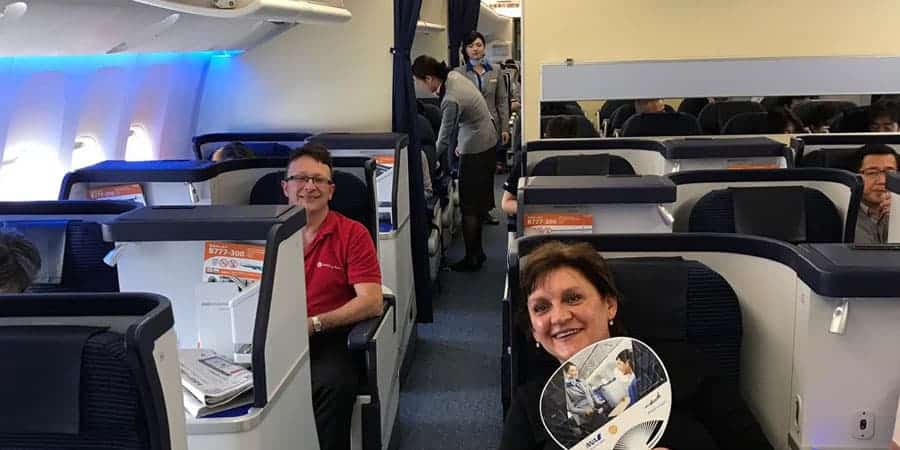 We travelled by ANA Airways from London Heathrow to Haneda Airport, Tokyo in Business Class.  Very comfortable, flat beds for the overnight flights enhanced with excellent service and refreshments. 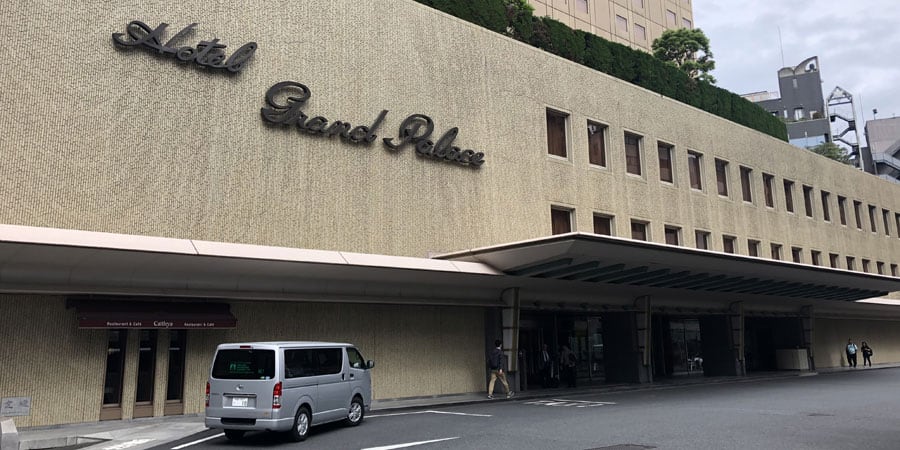 We were met by the Wendy Wu English speaking guide who was to stay with us for the 6 nights we would be in Japan.  Japan is a small country when compared with the vast Asian mainland – it is smaller than the state of California and covers just 368 square kilometres.  We covered a very small area of that in our 6 nights:  98 km from Tokyo to Hakone, 374 km from Hakone to Kyoto and 457 km back to Tokyo.

After checking in at the Hotel Grand Palace we met for the hotel buffet dinner.  The Grand Palace is a typical touring hotel and well located for the sights.  Our first Japanese buffet included Sushi, Sashimi, Miso soup with tofu, tempura and other delights.  I was to be in my element for the week. 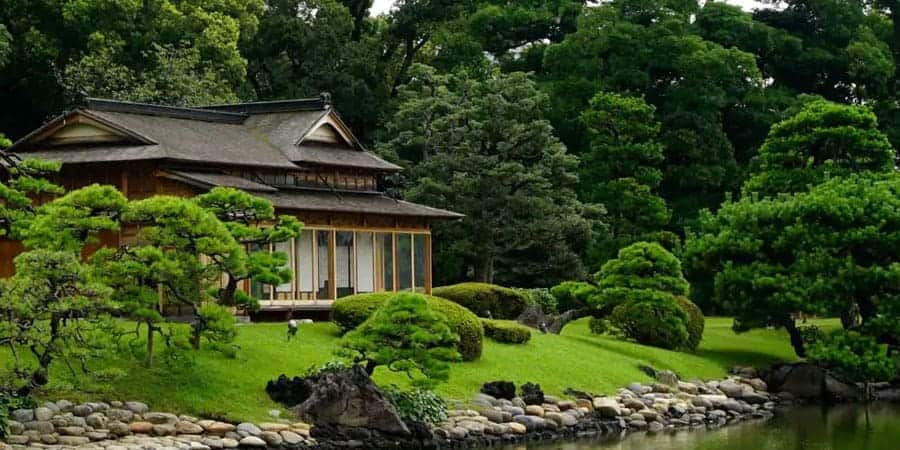 We hopped aboard a minibus which took us past the Imperial Palace but sadly not within its hallowed portals. The Palace is located on the former site of Edo Castle, a large park area surrounded by moats and massive stone walls in the centre of Tokyo, a short walk from Tokyo Station.  It is the residence of Japan’s Imperial Family and of course is home to the new Emperor and Empress of Japan, crowned just this year.

An extremely fast lift took us to the observation area of the earthquake-proof (wouldn’t like to test that!) Tokyo Sky Tree.  It is the tallest tower in the world at 634 metres and the second tallest structure in the world after the Burj Khalifa.  It is used for broadcasting and was completed in 2012.  Architecturally it is described by the Japanese as a fusion of neo-futuristic and the traditional beauty of Japan.  Rather terrifyingly I walked on a section of glass flooring which gives visitors a direct downward view of the streets below.

Japan is famous for its gardens and we spent some time in the Hama Rikyu Garden which is a public park in Chuo located at the mouth of the Sumida River.  Interesting to note it was built one year after the war in 1946. It was remodelled as a public garden park on the site of a villa of the Shogun Tokugawa family (extremely powerful family) in the 17th century.  In the garden you can find a pond with a tea house in the centre and we crossed one of the three bridges to reach the tea house where you can enjoy the ubiquitous matcha and Japanese sweets.  We saw stunning peonies and plum trees.

After returning to the hotel, we freshened up and split up into groups for dinner, me opting for the Ramen noodles with the Guide! 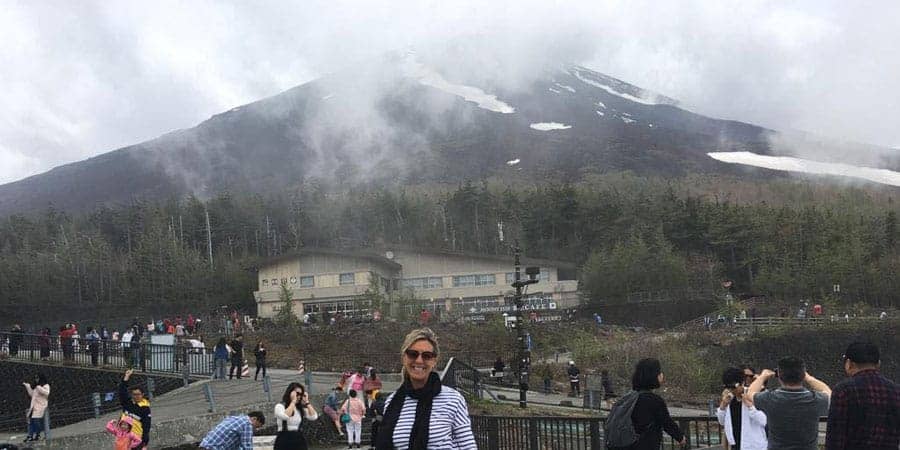 Today saw the brilliant Japanese courier service put into action.  We would go to Hakone for a night to see Mount Fuji and then go on to Kyoto where our luggage would already be.  It was important therefore to pack a day bag for the sleepover.  We headed off for Mount Fuji, catching glimpses of it through the cloud along the way.  We alighted at the Mt Fuji 5th Station ostensibly to see the views but first you are hit with myriad souvenir shops and relentless busloads of people.  But ultimately nothing can detract from the wonder of viewing Mount Fuji as elusive as she is behind the shifting clouds.

Mount Fuji is an active volcano commonly called Fuji-san. It is the country’s tallest peak at 3776 metres and has been a pilgrimage site for centuries.

We crossed Lake Ashi and alighted close to the Mt Komagatake Ropeway which takes you to the top of Mt Koma by Cable Car.  The cable length is 1.8 km and the views were sensational, through the cloud, though not for the faint-hearted.

After arriving at Hakone Sengokuhara Prince Hotel for the night we had dinner in their French restaurant.  This is a modern mountain resort and great for activities such as golf, tennis, hot springs, art galleries and swimming if you have the time.  Dinner was a lavish French affair of several courses. 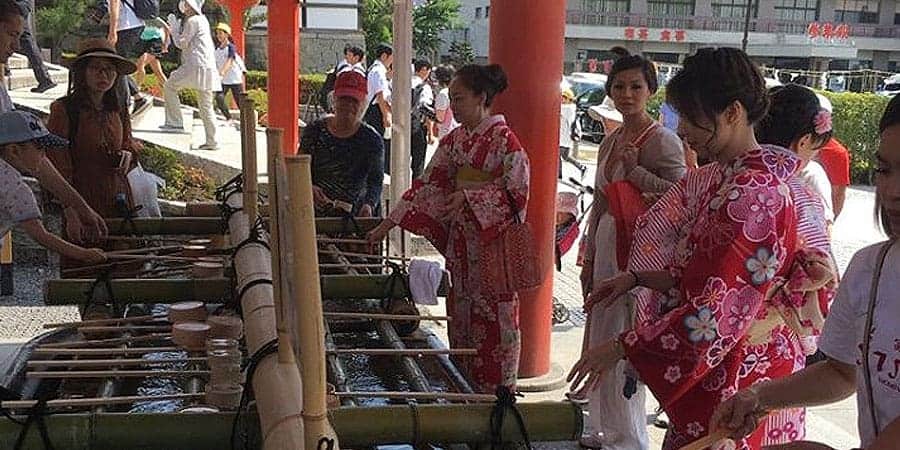 After breakfast we were taken to Odawara Station for our bullet train journey to Kyoto, Japan’s old capital.  The Shinkansen (bullet train) is a high-speed rail service sometimes travelling in excess of 250 km per hour.  Operations first began as early as 1964 and have just improved over time.  Amazingly you don’t feel as if you’re travelling at high speed – they are very comfortable, and staff move up and down with trollies of food just like South West Railways!

After the short journey to Kyoto we had lunch at the station.  I have become ‘mopper-upper’ of most of the delicious Japanese dishes as more than a few of us have less exotic tastes!

We then checked in to the Hotel Monterey Kyoto which is another touring hotel but I much preferred it to the Grand Palace in Tokyo which lacks character.  The Monterey has a chapel housed in a huge glass structure and is a nod to the Monterey Mission from California.

Kyoto is fascinating and unlike Tokyo has the charm and character of an old capital city having enjoyed that status from 794 to 1868.  It is famous for its numerous classical Buddhist temples, as well as gardens, imperial palaces, Shinto shrines and traditional wooden houses.  It is also known for the geisha girls and our guide took us later in the evening to the Gion district, famous for its geisha.

We split up again for dinner and once more I stuck with the guide for a typical Japanese dinner in the market area. 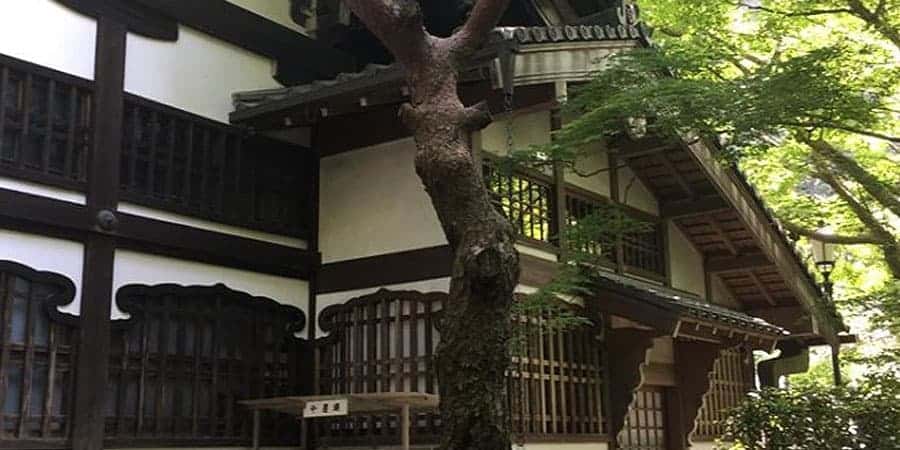 A full day tour of Kyoto today beginning with Ryoanji Temple which is a Zen temple considered one of the finest surviving examples of Karesansui, a refined type of Japanese Zen temple garden design generally featuring distinctive larger rock formations arranged amidst a sweep of smooth pebbles raked into linear patterns that facilitate meditation.

Our next stop was Kinkakuji temple or the Golden Pavilion.  It is a Zen Buddhist temple attracting large numbers annually and is a World Heritage Site.  It dates back to 1397 and the name Kinkaku is derived from the gold leaf that the pavilion is covered in.  In keeping with the Zen belief, the gold employed was intended to mitigate and purify any pollution or negative thoughts and feelings towards death.  The reflection of sunlight on the roof is mind-blowing and the effect the reflection creates on the pond is utterly glorious.

We then enjoyed a Kimono fashion show with an opportunity to buy one afterwards.  Tempting but I resisted – too pricey as I didn’t want a cotton one – only silk will do!

After lunch we were treated to a Tea Ceremony and a calligraphy lesson.  A Tea Ceremony normally takes over 4 hours but ours was shortened to half an hour.  Layered in tradition and Japan’s complicated etiquette, we learnt how to make the tea, serve and drink it.  It was a moving lesson and we all enjoyed it.  The calligraphy lesson that followed was most rewarding, resulting in a mounted rendition of our names.

We split up once more and I formed the group that went to one of the beautiful restaurants in old Kyoto overlooking the river.  Food was exceptional. 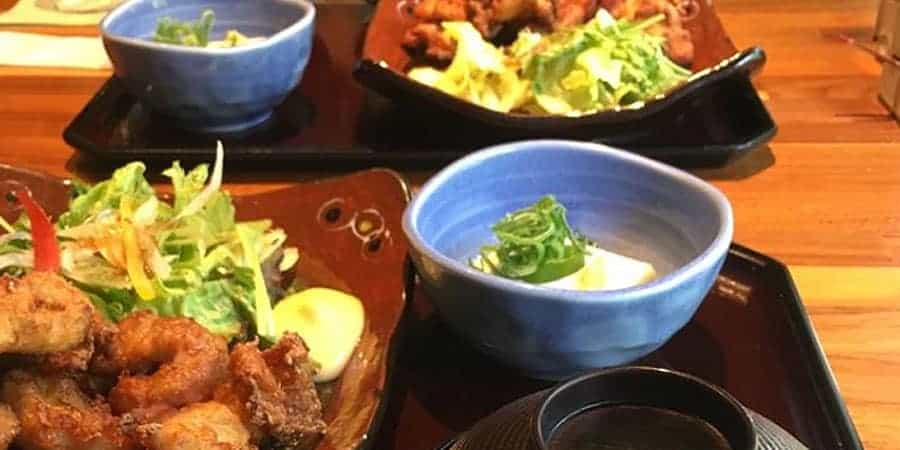 Once again we prepared our suitcases for the highly efficient courier service to take them back to Tokyo.  No overnight bag required this time though.

At Kyoto station we took the Shinkansen back to Tokyo where we went straight to dinner joined by two members of Tokyo Travel Service – a fun way to complete our tour. 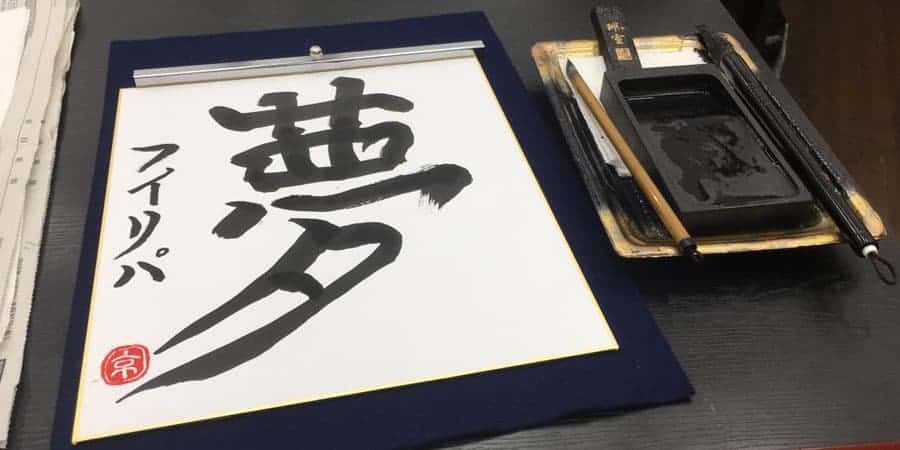 We experienced ANA economy service on the way back which was above average.

Japan has a fascinating and multifaceted culture; on the one hand it is steeped in the deepest of traditions dating back thousands of years and on the other it is a society in a continual state of rapid flux, with continually shifting fads and fashions and technological development that constantly pushes back the boundaries of the possible. This is part of what makes it such a fascinating country to visit. If you are looking for something different you are sure to find it here!

June is the start of the rainy season, but we were lucky in that the rain didn’t tumble down until our final day when we were leaving but ideally you should travel between November and June and avoid the wet time.  Wendy Wu offer a great range of itineraries within Japan and it was fantastic to experience what they have to offer first  hand.  This trip has certainly enhanced my knowledge and showcased three fascinating places to visit.

7-night classic tour, discover Japan’s essential highlights on this great-value tour. Explore the historical cities of Kyoto and Nara, be awestruck by the beauty of Mt Fuji and experience the bright lights of Tokyo and Osaka.

WANT TO KNOW MORE ABOUT TOURING THROUGH JAPAN?