As a child growing up, I was lucky enough to see a lot of the world with my Parents, however, my favourite place to go was Disney world.  That hasn’t changed much, as now at 23, I still try and fit in as many visits as I can.  You can keep track of Disney holidays with the My Disney Experience app. Since the introduction of the My Disney experience app, guests staying onsite can now book their dining reservations 180 days before and fast passes 60 days before.

Fastpasses open up for UK guests at lunchtime 60 days prior to departure. Luckily, I had the day off, as you have to be quick if you want to get the best rides!  Fastpasses are complimentary and are such a fantastic way to do all the rides without the queues.

Our resort for the two weeks was Disney’s Caribbean beach resort. Currently, it’s under renovations as they are rebuilding the main town centre along with a new DVC resort and a Gondola system that will connect the Caribbean beach resort with both Epcot and Hollywood Studios. Our room was located in Jamaica, which was so convenient, it was a short walk to the bus stop, the food court and the main amenities.

Our first evening we usually take a bus to Disney Springs, formerly known as Downtown Disney. The name change comes in addition to over 40 new shops and restaurants. When we were there last May, they opened the new Shopping centre on our last day. So, this year I was excited to see what they had done with the place. The expansion is beautiful and worth seeing. So many lovely new shops which include my favourite, Sephora and a giant Zara! The best part of our night was the Sprinkles Cupcake ATM, and the Mai Tai’s in the T-Rex bar.

The first ride we run to, a family tradition, is Space Mountain. The ride hasn’t changed much since it opened in the 70’s, so it really chucks you around and there are moments that you think you’re going to come off the rails! After Space Mountain, it’s a quick trip into Frontier land to ride Big Thunder Mountain, then onto my favourite, the Haunted Mansion.

I always love the Magic Kingdom for its Atmosphere and its originality. If you get in early enough you can catch the Morning Welcome, followed by the Trolley show on Main street.

With it being so quiet, we completed the magic kingdom in about 4 hours, even managed to pick up a few Trading pins to start this year’s collection. The evenings in the Magic Kingdom are very different to the day. 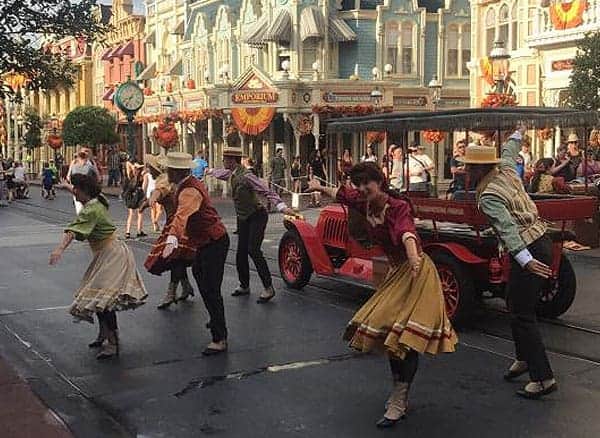 After a long day in the Magic Kingdom, and a well-deserved sleep, day two arrived. I was most looking forward to this day as a trip to Animal kingdom meant one thing… Avatar land. We headed first over to Expedition Everest, a backwards roller coaster around a smaller scaled Mount Everest, including a very Broken Yeti that’s supposed to jump out at you. It was then onto Animal Treks which consist of two main routes; one to see the Tigers and the other to see the Gorillas. My favourite is the tiger trek, but on this occasion, the Tigers were tucked away. For good reason though, the Tigers had just had 2 gorgeous baby cubs, only about 12 weeks old.

After a quick trip to see the Tigers and Gorillas, it was finally time to visit the Alien Planet of Pandora.  For anyone that’s a fan of Avatar, I would say this is a must do! The theming is incredible, from the moment you walk into the world, you’re submerged in sights, scents and sounds from another planet. The pathways and plants are painted with a bio-Luminescent paint which glows at night. You can tell the imagineers have really put a lot of thought into making this world authentic.

In the mist of the new land comes two new rides, The Navi River Journey and Flight of Passage. I was lucky to get Fastpasses for both rides. Flight of Passage features completely new ride technology which makes it a completely unique experience and unlike any other ride, so is a must do! 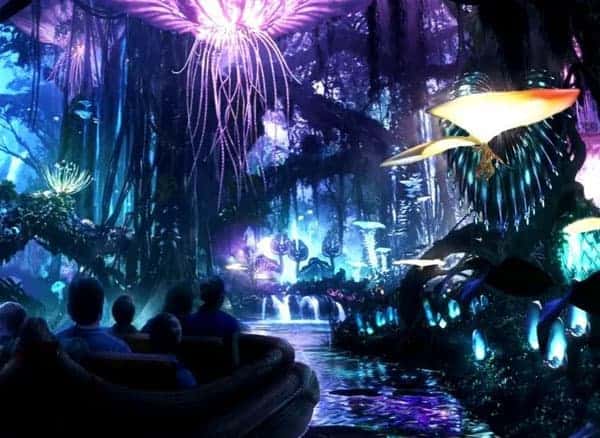 On our third day, it was Hollywood Studios day. Hollywood Studios – formerly known as MGM studios, is currently halfway through the process of adding the much anticipated Star Wars Land and launched the opening of Toy Story Land this June.

Hollywood studios is home to two of my favourite rides. Tower of terror and Rock N Rollercoaster. I used to hate the Tower of Terror, and didn’t go on it until I was 13 in California. I’d now consider it my best ride, and dragged my poor other half on it about 8 times this year. Another great ride in Hollywood Studios is Toy Story’s Midway Mania. This ride is just fantastic, it’s a 3D virtual reality game in which you battle obstacles, smash plates and pop balloons all to get the highest score!

The Evenings in Hollywood studios are great (second to the Magic Kingdom of course), Star Wars – A Galactic Spectacular fireworks are out of this world, using pyrotechnics and fireworks simultaneously going off with both music and projections on the Chinese theatre, it’s not to be missed. The best of the evening entertainment is Fantasmic, based on the film Fantasia, this 30-minute show immerses you in the world of Disney, showcasing the various characters, music with a classic Disney twist.

Hollywood Studios, although in its current state, is still considered a fantastic park and is great for both teens and tots alike. I’m really looking forward to seeing what the future holds for this park, as being a big Star Wars fan, the world has a lot to live up to!

Our 4th day was Epcot, otherwise known as the Experimental Prototype Community Of Tomorrow is also another great park. This park is a little more laid back but still has some great attractions. Test track is the main ride in this park, it’s a high-speed car test simulator, sponsored by Chevrolet. Whilst waiting in the queue, you can design your own car, which you can put to test against other guests on the ride.

Another must do is Soarin around the world, this 3D cinema ride takes you on a flight around the wonders of the world, taking in the scenery, and a few surprises. My favourite ride in Epcot is Mission space. This ride has two setting, Orange and Green. Green is a trip around the earth, great for kids and people not prone to motion sickness. The orange mission is more intense, and not recommended after drinking a tequila lemonade! The Orange mission is a simulated mission to Mars. It uses centrifuge that spins and tilts to simulate the speed and G-forces of a spacecraft launch. It took my Boyfriend and I at least an hour to calm down after the ride (this may have been due to the tequila)

After recovering from out intense mission to Mars, it was a short walk to Epcot’s World Showcase. The World Showcase is a collection of 11 countries, each of which country is themed to the set destination. The countries are great, and not a single detail is missed! Every country is authentic down to the food, merchandise and even the cast members

Every year, Epcot will host two festivals. March to May is the Flower and Garden festival and September – November is the food and wine festival. We made it for the food and wine this year, after going to the Flower and Garden last year. The food and wine festival has a taste of food from over 34 different countries, and if you’re on the Dining plan, you can use your snack credits here. It was a fantastic evening wandering around the worlds, trying different food, and eventually watching Illuminations, which is Epcot’s evening firework show. 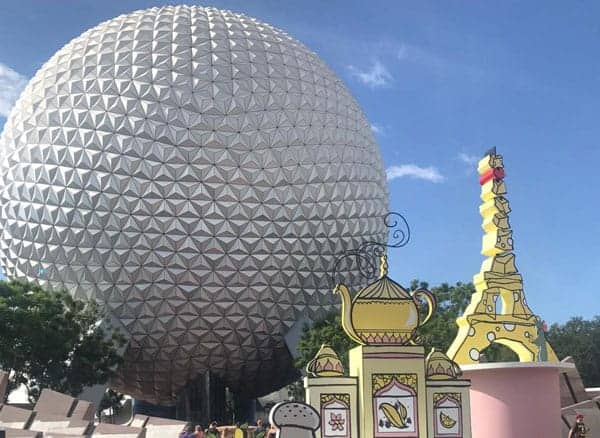 We had Halloween party tickets, which I was so looking forward to. Halloween and Christmas party tickets are an additional cost and have to be pre-booked, however, I would definitely recommend it! We had access to the park form 4 pm, and then sole use at 7 pm where anyone without a ticket had to leave.

The party takes place in the Magic Kingdom, and the evening consists of rides with virtually no queue’s, trick or treating, rare character meet and greets, stage shows and Halloween fireworks. Along with various treats and selected limited-edition merchandise. Best of all is the Boo to you Parade, a quirky parade full of characters, floats and the infamous gravediggers. And to top it off, a catchy tune that you’ll be humming for months to come.

The remaining week was a blast. Numerous visits to all four theme parks, along with a trip to Blizzard Beach and Typhoon Lagoon, Disney’s water parks. The fun never ends, and it’s such a slump when you have to come back home. The good thing about coming home though means it’s time to book another trip.

We may hold off until 2021, as then Disney World will be 50 years old. To prepare for this, Disney are building numerous new rides and lands. 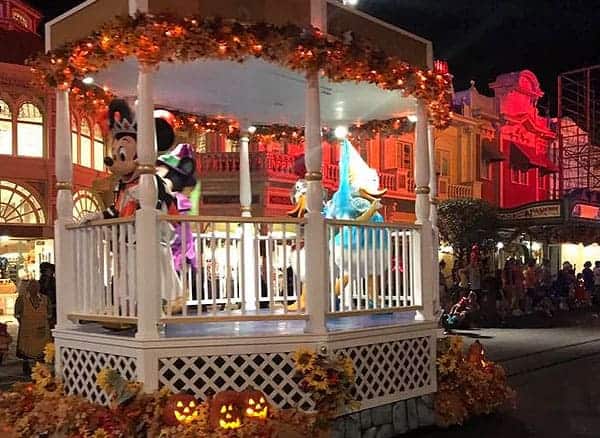 If there’s anything I can advise for a Florida holiday is go for it! Try and balance it with parks and pool time  It’s a long holiday and can be tiring. But you will have so much fun!