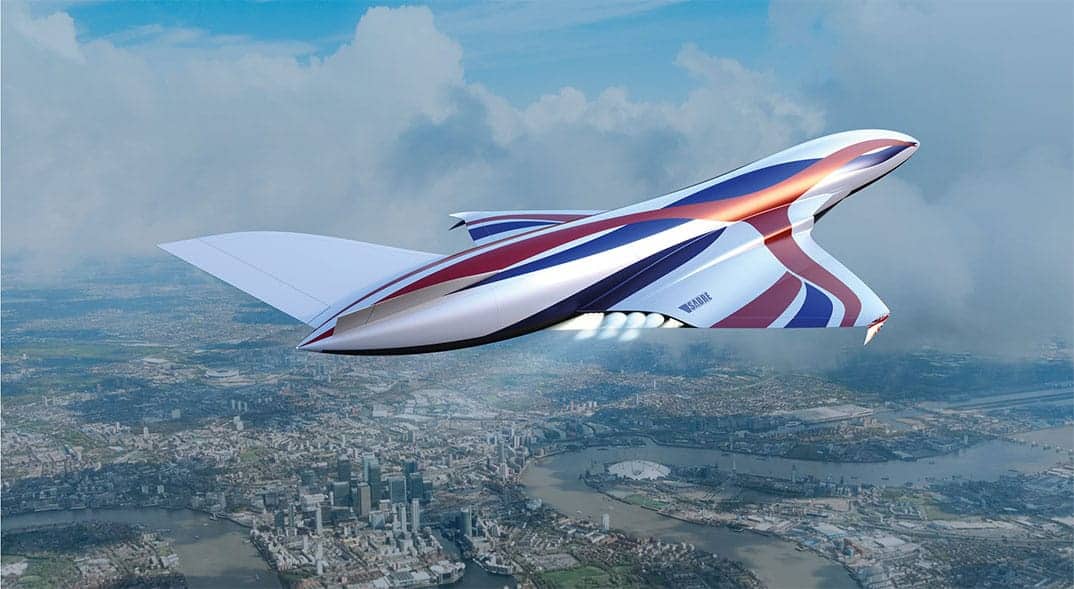 Four hours from London to Sydney? It may seem like the stuff of science fiction, but a recent UK hypersonic engine project – called Sabre – might just make it a part of our present reality.

The name ‘Sabre’ is an acronym for ‘Synergetic Air-Breathing Rocket Engine,’ a descriptive name if there ever was one. The Sabre engine functions like a cross between a jet and a rocket, combining the two technologies to create enough power and speed to break all commercial flight records.

The concept is made possible by the new ‘HTX’ pre-cooler heat-exchange system, without which the engines could not sustain the power necessary to maintain the target atmospheric cruising speed of five and a half times the speed of sound (almost 2km per second) – and five times that speed when in orbit!

What it can do

These speeds would enable Sabre-equipped aircraft to make long commercial flights in a fraction of the current time. They use an air-breathing jet engine system from standstill to about five and a half times the speed of sound, cruising in the high atmosphere for decreased air resistance.
As impressive as that is, the Sabre engine can do even more.

The craft can then engage the rocket engines and reach speeds of twenty-five times the speed of sound, propelling it into orbit. No multiple stages, and no multi-million (or multi-billion) pound disposable rockets. Once the payload is released into orbit, or the non-payload mission completed, the craft returns to the atmosphere and to a safe landing, much as any traditional aeroplane would.

Reaction Engines Ltd (REL) is a private venture company, but is backed by some heavy-hitters in the aerospace industry to tune of more than £100 million. The likes of BAE Systems, Rolls-Royce, Boeing and the UK government have provided capital and expertise to the project. Technical auditing is provided by ESA and UKSA (the UK Space Agency), ensuring that test results and data are accurate and supported by repeatable demonstrations.

The various engine components are still in the testing and demonstration phase, but results are promising and experts at the European Space Agency (ESA) have signed off on the design for demonstration in Buckinghamshire in 2020. In the meantime, each component is being tested and observed to make sure it can do its allocated part.

According to REL CTO Richard Varvill, ‘One of the great advantages of the Sabre propulsion concept is that it is totally modular from both design and operational perspectives. Therefore, it is possible to subject each of the key components of the engine to rigorous ground testing, which fully mimics the operational conditions the engine will face up to Mach 5 flight at 25km altitude.’

Tests currently running in Colorado will put the cooling system through its paces, verifying that it can do what the maths and preliminary tests promise.

The core section will be tested in a purpose-built facility at the Westcott space park, the same site as Britain’s post-war Rocket Propulsion Establishment.

When tests of section one and two are completed, what remains is to link the components together and get a prototype craft into the air. Once that is done, super-atmospheric tests will need to be completed to test the rocket engine section. These should be straightforward enough, as it is not new technology, but testing it as part of the three-component system will need to wait until the other two sections are tested and safe for the attempt of a jump to orbit – testing it in the atmosphere will not yield the data needed to provide proof of its usability as a reusable, commercial space vehicle.

According to spokespeople at REL and ESA, the project is moving ahead nicely, and a test version of this new engine is ready for implementation.