Meon Valley organise the air travel logistics for the annual Vodafone Global Sales Incentive. On this occasion there were 45 winners plus their travelling companions with 90 passengers from across Europe, The US, South Africa and Asia who were booked and ticketed by Meon travelling to Chiang Mai, Thailand.

Against a deteriorating political situation, the Thai military overthrew the civilian government and imposed martial law and a night time curfew nationwide a mere four days before the Vodafone group were due to arrive in the country. The client immediately requested that a new destination other than Thailand be proposed which would provide the guests with the same experience which they were due to share in Chiang Mai.

Our ability to deliver an alternative venue was complicated by the fact that the military was essentially of a peaceful/nonviolent nature with no civil unrest. Accordingly, the Foreign & Commonwealth Office declined to declare a travel advisory against travel which translated to airlines refusing to refund the previously issued air tickets.

Our partners organising the event ground arrangements were able to secure alternative accommodation in the Malaysian island resort of Langkawi. This destination gave us the facility for all the incentive participants to still travel into Bangkok Airport. From here we sourced a charter flight to make the 90 minute air journey to Langkawi as there was no existing scheduled flight operating the route. We negotiated with airline partners such as Thai Airways to reissue the original tickets without the internal flights between Bangkok and Chiang Mai thus enabling the passengers to seamlessly transit within Bangkok airport to their new destination. All elements of this were achieved between Friday 23 May to Monday 26 May – a UK bank holiday – with all passengers arriving into Bangkok on morning of Tuesday 27 May.

We are determined to help get business moving again.

Start to book your business travel through us and we’ll give you the first 3 months fee free.

Meon launches Focus PinPoint a new traveller tracking software to help organisations keep track of both past and future travel arrangements. The software aims to

Mark Jackson, Founder of Travel Begins at 40 gives us his top tips on how to work the ‘new normal’ and what to expect now he’s already travelling…

We keep on hearing about the New Normal, but what exactly is the new normal for business travel? In recent weeks I have travelled by 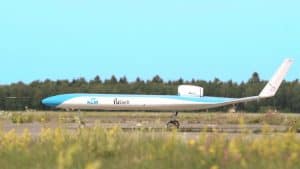 Flying-V Model Takes to the Skies

We are determined to help get business moving again.