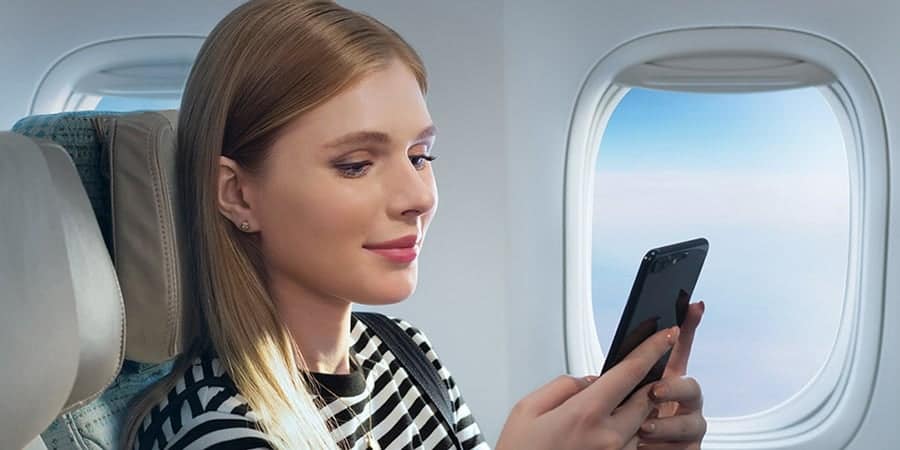 It was not that long ago that internet access – through the in-flight entertainment system – was introduced to flights, but that was very limited, and didn’t allow us to connect with our personal or work devices. Now, the progression of technological advancement has brought airline WiFi to many airlines, opening the door to phone calls, streaming, fielding emails and even video conference calling.

Some passengers feel it degrades the overall quality of the flight and, for those seeking a break from digital connection, that may be true. For business travellers, however, having the best airline WiFi can mean the difference between a productive, positive flight, and a black hole in the day’s work.

If dropping out of communication for hours at a time can have a detrimental effect on your business, then finding and using the best airline WiFi available is nothing less than a key investment.

What makes the best airline WiFi?

Like WiFi anywhere, the first consideration is whether it is available. You can have all the on-board bandwidth in the world, but if the system isn’t connected to the Web itself, you’re on a digital desert island.

This is becoming less of an issue as satellite and ground infrastructure grows and technology advances. Competition in the airline industry is helping to drive this development further, and we can all expect improvements at rapid intervals.

The second issue is the speed, or bandwidth, you can get. Some remember the old days of screens ticking downward, line-by-line, as pages loaded. We’ve moved past that now, and a fraction of a second’s delay can increase stress and frustration. We want the data, and we want it now.

Step onto an airplane, and you might be stepping into a significant drop in the speeds you’re used to. This isn’t always the case, but a prepared business traveller has to be ready for it.

The top 10 airlines for business WiFi

The top ten airlines for overall WiFi are listed here. Quality and availability can vary, flight to flight, but on average this is where we rank them:

How does airline WiFi compare with ground WiFi?

In almost every way, airline WiFi is not yet the same beast as ground-based business or even residential systems. It is improving quickly, but despite those gains, the speed of data transfer will still be less than you are used to. If it wasn’t that it is the only real option at 35,000 feet, it would have been thrown from the market years ago.

Part of the problem is that the demand placed upon airline WiFi systems is growing at a similar (sometimes faster) rate than the advances in bandwidth and speed. A 50% increase in WiFi speed, for example, works out to a net loss if there is a 75% increase in demand.

Airlines are therefore struggling to take a leap ahead of the curve and provide the best airline WiFi by anticipating future needs and installing infrastructure that can handle it. For those of you who are tech-minded, the current average offering is around 12Mbps (download speed), with top-market speeds of up to 50Mbps, and common speeds of 3Mbps. Qatar Airways, for example, offers a ‘Super WIFI’ service with speeds of up to 50Mbps, but their average speed is only 8Mbps.

To provide some context to these examples, the FCC defines ‘broadband’, which you likely have at the office and at home, as at least 25Mbps for download speed (3Mbps upload). In other words, even the best airline WiFi offers only a fraction of the performance you can reliably expect at home – and yes, sometimes none at all.

Failures still happen, and though most land on the globe is in a covered area (up to 95%), the oceans and other places that aren’t covered are often the places that (especially long-haul) flights tend to traverse. This coverage is improving, however, and should soon mean 100% global coverage, on land or in the air.

How does airline WiFi work?

Airline WiFi works very much the same as the system that connects your mobile phone when you’re on land, moving around by foot, on a train, boat or in your car.

As the aeroplane travels along, the on-board internet system connects with towers on the ground below it, and satellites in space above it. As one source gets more distant, the system will automatically connect with a nearer one. This continues, like a data relay race, throughout the duration of the flight, sending and receiving information through the antenna attached to the top of the plane.

Your mobile device, be it a phone or a cellular-enabled laptop or tablet, can then connect to the on-board WiFi via a router installed in the plane itself, enabling most of the same functionality you would have at home or in the office.

The United States still prohibits voice calls on aeroplanes, but in most of the world you can make and receive phone calls, steam video, upload data (usually with limitations and low speeds), participate in chats and audio and/or video conference calls.

Some national airlines may prohibit certain content or websites, so it is a good idea to check if you are unsure of the availability of certain sites. Sites featuring adult themes, religious information, and certain political views may be included in these restrictions.

It is also worth considering that etiquette demands that you maintain the usual somewhat subdued volume levels within the cabin of the plane. A conference call or negotiation may best be left for a situation in which you can raise volume if necessary.

Also ensure that content is appropriate to public viewing, as sensitive or very young passengers may have a clear line of sight from behind your row. Depending on your industry or profession, this can be an issue.

Also worth noting is that such systems are not as secure as an office. Along with line-of-sight allowing some passengers to see sensitive data on your screen, there is the issue of security in general. Even the best airline WiFi should be treated much as any public WiFi would be, and precautions taken to encrypt and keep private any important information. 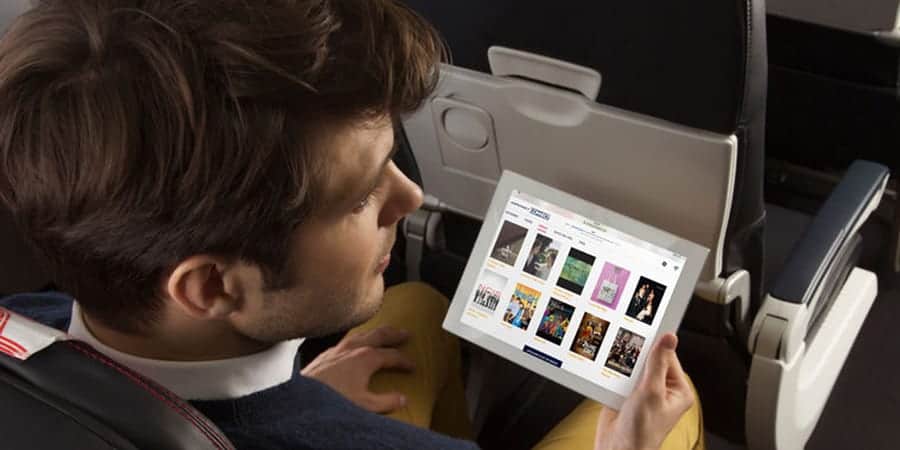 Where is the best airline WiFi?

Because the United States has the most developed infrastructure for satellite and mobile networks, the best airline WiFi you can get is on flights over the continental United States. WiFi service in American airspace is also cheaper than most others, also due to an abundance of related infrastructure.

Satellite coverage over Australia and the Pacific Ocean has recently meant a steep improvement in airline WiFi in those regions, and technological advances in the global airline WiFi market are enabling speeds exceeding 3G.

Though budget airlines are offering on board WiFi as a perk, the highest investment – and therefore fastest and most reliable service – is still mostly the territory of the major players. Qatar Airways, British Airways, and Virgin are leading the pack, but carriers such as Qantas Airways, Air New Zealand Ltd., and others are close behind.

How much does airline WiFi cost?

Some airlines, like Emirates Airways, Qatar Airways, JetBlue, Norwegian, and others, offer a limited amount of free WiFi data, on certain flights, to be used within a certain amount of time.

Aside from these deals, most airline WiFi costs between US$6 and US$20 per hour – about £5 to £17. Browsing fees, as opposed to streaming fees, can be as low as £5, and packages that allow only messaging can come in at under £3. Some deals sell a certain amount of data, rather than access for a certain amount of time or service type.

If you want to work more-or-less as usual then it can add up but if you just want to keep in touch and be available to put out any sparks before they become fires, it often comes in at a few pounds.

So… Work as Usual?

Despite the widespread availability of airline WiFi, it is not a good idea to schedule that all-important video conference call during your flight, or to plan to tackle any very important task that will require reliable, and high-quality, on-board WiFi.

A wiser plan is to earmark your flight hours for fielding emails, reading over important documents, writing up reports that don’t require a lot of online performance, and other similar tasks. Anything that requires more WiFi performance should be left for later, unless it’s urgent. You may, after all, have all the bandwidth you need – just don’t rely on it.

Even the best airline WiFi isn’t as good as what we’ve come to take for granted at home or office – but it is a HUGE improvement on what we used to face: those long, blacked-out flights where we left the ground with everything intact and running smoothly, only to land and find out our company was six hours into a major crisis.

Work might not be quite as usual, but airline WiFi has at least given us a lifeline to business information even while hurtling through the lower atmosphere. All things considered, it’s a gigantic leap forward, and as the best airline WiFi improves even more, perhaps the performance gap between ground and skies will close, leaving us fully connected and fully armed for commerce – even while airborne.